One of the hottest job opportunities for felons these days is becoming a driver for a ride sharing company, like Lyft or Uber. Earning a high income is a huge selling point, Lyft drivers reportedly make almost $30 per hour!

Since so many of our readers are interested in getting into this line of work, we decided to do some digging to find out how much Lyft and Uber drivers REALLY make.

We will compare salaries of drivers from these two companies and give you a realistic picture of what you could actually be earning if you decide to work for ride sharing services. 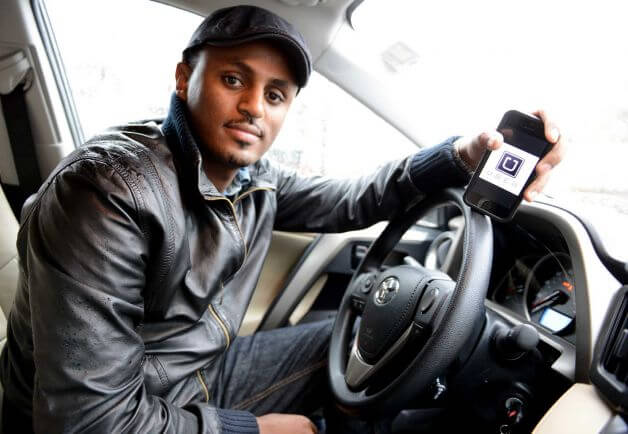 Average Income Of A Rideshare Driver – The Hype And The Controversy!

When you look at how many people are getting into the ridesharing business, you may get the impression that this is a Golden Job Opportunity.

Indeed, both companies report that drivers can earn between $20-30 per hour when working during peak hours and in the cities with highest demand for ridesharing. However, while sometimes drivers do earn this much money, this is NOT typical pay. Moreover, this is the reported amount before any expenses, taxes and commissions are taken into account.

So what’s a more realistic figure?

When analysts took a closer look at how much drivers actually take home after all the deductions, the numbers didn’t look so great. In fact, they are pretty much minimum wage!:(:(:(

Washington Post did a salary calculation for Uber drivers in 3 major cities, taking into account all expenses, fees and taxes. This is what they came up with:

In recent months, MIT’s Center for Energy and Environmental Policy Research released a report on real salaries of Uber and Lyft drivers, based on surveying 1,100 drivers.

Researchers found that workers at both companies make only $3.37 per hour!!!!

This calculation is based on number of miles driver, type of car used, cost of gas, maintenance and depreciation. Of all the factors, the biggest reason for such low profit is car depreciation..
[neoad content1]

Factors That Impact Your Earnings

Its very important that you understand why there is such a HUGE DIFFERENCE between reported net income compared to gross income for both Uber and Lyft drivers. There are a number of factors that can significantly lower how much money you actually end up making:

– Day of the week and time of day. Both companies have surge pricing for peak hours of the day, and you can make 2-4
times more the standard rate. Weekends also have higher fares than weekdays.

– Fuel expenses. These can vary depending on the type of vehicle you have.

– Federal and State Taxes. Since drivers are independent contractors they pay double the taxes on wages, compared to regular workers.

– Car depreciation (if this is factored in, your pay is much lower). Both companies offer a car leasing option, so you
are not putting a crazy amount of miles on your own car. However, doing this also lowers your real profit.

– Car maintenance and repairs, such as the cost of tires.

– Money spent on water, snacks, tissues, and other things for the passengers.

Overall, once all the expenses are taken into account, your actual earnings will be 20-35% lower than you gross income.

How Much Do Lyft Drivers Make?

Lyft reports that median nationwide earnings for a driver are $29.47 per hour (gross income). Drivers working in the company’s top 25 markets reportedly earn $31.18 per hour (gross). As we mentioned before, a more realistic figure is about $10-15 per hour, depending on your location.

Loan company Earnest, reports that median monthly income for Lyft drivers is $210 per month, and the average is $377 per month.

The company also offers a $300 sign up bonus for new drivers after they complete 100 rides in 30 days.

One way Lyft drivers get a significant income boost is via the tipping feature in the app. It encourages the passenger to leave a tip, right after the ride is finished. Lyft reports that from 2012 to 2017, its drivers took home more than $500 million dollars in tips alone! In 2016, the company invested into enhancing the functionality of the tipping feature, which resulted in an increase of 8% in tips starting in 2017.

Most generous cities with the highest tips are:

How Much Does Uber Pay?

Uber reports that in its top 20 markets, drivers make $19-20 per hour. If you drive a fancier car, such as BMW, Cadillac, etc, you get paid more and you get cleaner passengers.

Loan company Earnest, finds that median monthly income for Uber drivers is $155 per month, and the average is $364 per month.

The company offers a very attractive sign up bonus of $500 if you are able to complete 75 rides in 30 days.

Its important to note that on a number of occasions Uber has lowered rates for its drivers without warning, so they end up making less money. This creates an unstable work environment where you can’t be sure if and when more of these salary cuts will happen.

Because Uber has been loosing drivers across many cities as a result of all scandals and protest campaigns, such as “Delete Uber”, the company has introduced at tipping feature in their app in June 2017. This is similar to what Lyft offers its drivers.

Which Company Should You Work For?

While an Uber driver salary is about 10-15% lower than Lyft, one of the biggest benefits of working for Uber is that this service is available in many more locations. Also, a lot more people use this service, which means you are getting more business. Currently, Uber is available in over 312+ cities across the US. Compare this to only 59+ cities where Lyft operates. So, if you live in a smaller, more remote town, Lyft may not be an option for you all together. If Uber is available, we recommend you give it a shot.

Its important to note, that a long-term disadvantage of working at Uber is the possibility of being out of a job within the next couple of years. This is because the company is heavily investing into self-driving technology and reportedly plans to eventually phase out all of its human drivers with automated technology. At this point, Lyft is not pursuing a similar business strategy and is committed to retaining and growing its driver work force. In fact, the new tipping feature in the app is a big sign of the company trying to look out for its employees and help them boost their income.

Thus, if you live in a large, busy city, and both services are offered, it may be wise to work for Lyft. Primarily, because tips will allow you to earn more money. Moreover, the company seems to actually care about the well-being of its drivers and views them as partners in the business, as opposed to a disposable tool to make money.

Another option is to enlist as a driver for BOTH companies, if they are available. You can switch back and forth between them, depending on your needs, time of day, pay per ride, etc. By taking whichever ride comes first, you can minimize your down time and increase your total earnings. Moreover, this can be a great way to figure out for yourself which company you prefer to work for.

Still, as a rideshare driver you may not end up making enough money to make ends meet. So perhaps the best idea is to do this part time to earn supplemental income (extra cash), in addition to another job.